According to the National Highway Traffic Safety Administration, pedestrians in the US are hit by cars every 8 minutes - a statistic that residents of Washington, D.C. should take to heart. Since nearly half of workers in the District walk to work or take public transportation, there is an overwhelmingly large portion of the population at risk of pedestrian accidents compared to other large cities.

On crowded streets in D.C., pedestrians who leave the curb a second too early may suffer broken bones, traumatic brain injuries, pelvic fractures, spinal cord injuries, or require amputations—and in many cases, pedestrians will be paralyzed or killed as a result of their injuries. In 2013, there were 955 crashes involving pedestrians recorded in the District, 12 of which resulted in death according to data collected by the District of Columbia Department of Transportation (DDOT). 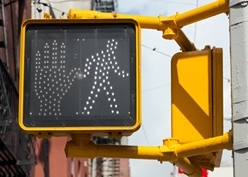 The most common cause of pedestrian accidents is negligence. In legal terms, negligence is a failure to use a reasonable amount of care and attention to protect the safety and well-being of others. Examples of negligence include:

Texting, talking on cell phones, and other distractions pull a driver’s attention away from the road, increasing the likelihood of an accident.

Driving under the influence.

Drinking alcohol before driving is not only illegal, it also demonstrates that the driver was not exercising proper care if he is involved in a crash.

Failure to check all traffic routes.

Many pedestrian accidents occur at intersections, particularly when cars turn into the path of pedestrians in crosswalks who have the right of way.

Drivers who exceed the speed limit or fail to come to a complete stop at stop signs or lights can be held liable for negligence.

Municipal entities can be held liable for pedestrian accidents if sidewalk conditions prevent proper use, such as if flooding or deep snow forces pedestrians to walk in the road or overgrown bushes reduce visibility.

Currently the D.C. metro area is bound by a law called “contributory negligence,” which prevents injured pedestrians and cyclists from recovering anything at all if their actions played a role in the accident. Some states have partial contributory negligence laws that allow victims to recover a reduced amount of damages if they are found liable for some portion of the accident. But in Maryland, Virginia, and Washington, D.C., victims can be denied payment if they are found to be to be even one percent negligent for the events leading up to an accident.*

Contributory negligence in car accidents is determined using the following:

Negligence hinges on determining which party did not exercise a reasonable level of care. In other words, which party did not act as a reasonable person would have under similar circumstances. Drivers and pedestrians are both expected to obey traffic laws and use common sense on streets and crosswalks. A pedestrian who jaywalks or darts out between parked cars is not using reasonable care, just as a speeding driver would be found negligent.

There are many ways to provide proof that actions directly caused a crash. Pictures taken at the accident scene or video from posted surveillance cameras allow a jury to see at a glance what happened on the day of the accident.

It can be difficult to determine who is at fault in the aftermath of an accident, as evidence is often lost quickly. Testimony from witnesses at the scene can help establish who was in the wrong.

In some cases, attorneys will work with experts to reconstruct the accident, allowing these specialists to give expert testimony in court.

Have You Been Injured In An Accident Virginia, Maryland or Washington D.C.?

If you've been hurt in an accident you need to speak with an experienced personal injury attorney as soon as possible. Please contact us online or call our Vienna, Virgnia office directly at 703.991.7978 or our Rockville, Maryland office at 301.637.5392 to schedule your case consultation.

by Yuvora Nong
Helping VA, MD & Washington D.C. clients with all of their immigration law legal needs since 1997.
Be the first to comment!
Post a Comment