In 2014, President Obama announced a sweeping plan to address immigration in the United States. With two major executive actions, the plan aims to 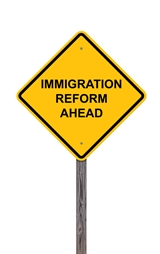 reduce illegal immigration at the borders while providing stability and a path to citizenship for those already in the country, as long as they are not a criminal enforcement priority. The actions came under quick opposition in political arenas, but their potential impact on both immigrants and citizens alike in the United States cannot be denied. Learn more about these immigration reforms and how they may impact all Americans.

Deferred Action for Childhood Arrivals and Parents of Citizens

The two main initiatives would grant many of illegal immigrants already in the country to avoid imminent deportation and secure or maintain lawful employment while pursuing a path to citizenship. These actions, according to the White House, will give millions of undocumented people a chance to live and work legitimately in the U.S., including paying their fair share of government taxes. The two actions are:

This action would affect those who came to the U.S. as children but have no current legal immigrations standing. A person could be eligible for this program if he or she arrived in the country before the age of 16 and has lived here continuously since at least January 1, 2010. Additionally, the action stipulates that the individual must be in school or have graduated (or obtained a GED), and they must not have a criminal record or be suspected of criminal activity.

This action would allow undocumented parents of citizens and permanent residents to remain in the country if their son or daughter met those citizenship requirements as of November 20, 2014, and if they themselves have lived in the U.S. continuously since at least January 1, 2010. Additionally, the parents must not be an enforcement priority for removal from the country, meaning in general that they have not committed any crime and are not under investigation for any criminal activity.

Benefits of These Immigration Executive Orders

President Obama issued these orders in hopes of achieving a number of goals for both undocumented immigrants and the citizens of the U.S. For those illegally living and working in the country, the benefits may seem obvious. They include:

Proponents of the programs also tout potential positive impacts for everyone living in the U.S. As these undocumented immigrants move into legitimate status, they are able to legally obtain work, drivers’ licenses, and more. Following, more people are able to purchase auto insurance and healthcare benefits, reducing the cost of the uninsured that weighs heavily on our current system. Additionally, experts say that while it is difficult to measure, the program creates a culture of acceptance and support that can enable talented, hard-working people to emerge from the shadows and contribute to the American dream.

Economic Growth as a Result of Immigration Reform

Those aren’t the only potential positive outcomes of these programs, however. Government groups and immigration advocates have touted serious economic growth as the top benefit to the implementation of this policy. Higher employment rates mean more people are paying into the tax system.

A study by the Center for American Progress examined the potential impact on both national and state economies. Their results state that the national economy could grow as much as $230 billion over 10 years. Locally, the predictions are also positive. They include numbers for:

In Virginia, the study states a potential increase in GDP of $4.2 billion, with the addition of 530 new jobs each year and an estimated $2.6 billion increase in earnings for all state workers.

Our nation’s capital could also see significant economic growth as a result of the immigration reforms. The same study predicts a $938 million increase in GDP, with an increase of $246 million for all workers.

The study estimated that a little over a third of the undocumented population in those three areas could be eligible for enrollment in either DACA or DAPA.

Are You Concerned About How Executive Orders On Immigration Can Impact Your Life?

If you feel recent Executive Oorders On Immigration will impact your legal status within the United States you need to speak with an experienced immigration attorney as soon as possible. Please contact us online or call our Vienna, Virgnia office directly at 703.991.7978 or our Rockville, Maryland office at 301.637.5392 to schedule your case consultation.

by Yuvora Nong
Helping VA, MD & Washington D.C. clients with all of their immigration law legal needs since 1997.
Be the first to comment!
Post a Comment