Some drivers don’t think twice before having a drink and getting behind the wheel. But what many people don’t realize is that you do not have to be legally intoxicated to be cited for impaired driving in Maryland. The state has strict laws against drinking and driving, and penalties have increased significantly for these offenses over the past few years. 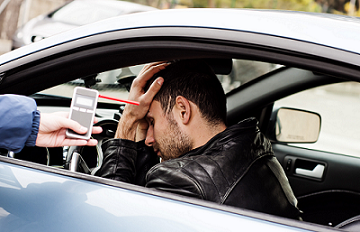 One of the most notable changes to Maryland's impaired driving laws is the Drunk Driving Reduction Act of 2016, commonly known as Noah’s Law. Noah’s Law went into effect on October 1, 2016, and expands the use of ignition interlock devices.

The law will require mandatory participation in the Ignition Interlock System Program for drivers who:

Offenders must have breath-analyzing devices installed in their vehicles for one year or longer, depending on the length of time between offenses. In addition, drunk drivers whose blood alcohol concentration (BAC) registers between 0.08 and 0.14 percent may opt-in to the program for one year instead of losing their licenses.

State laws allow Maryland drivers to be charged with two different types of drunk driving offenses: driving under the influence (DUI) and driving while impaired (DWI). The biggest difference between the two is the amount of alcohol detected in a person’s system.

Driving while impaired is the lesser of the two drunk driving offenses. To be charged with DWI, a driver’s BAC must be between 0.06 and 0.07 percent, and the state must prove that the person’s driving ability was impaired. Although it may be a lesser offense, there are still severe penalties for DWI in Maryland, including:

A fine of $500, 8 points on your license, license suspension up to 120 days, and imprisonment for up to one year.

The term of imprisonment, amount of fines, and length of license suspension will be higher depending on the circumstances, such as if you were driving with a minor or if you have committed previous offenses.

An adult driver whose BAC is 0.08 percent or higher will be charged with driving under the influence. Penalties are greater for this offense and often carry longer prison sentences if there was a serious threat to safety or loss of life. The following is a brief overview:

A fine of $2,000, 12 points on your license, a mandatory minimum of five days in prison with a maximum sentence of two years. If the second DUI conviction is within five years of the first offense, drivers will suffer mandatory license suspension (followed by participation in the Ignition Interlock Program when the license is reinstated) and must participate in an approved alcohol abuse program.

There are additional drunk driving penalties for bus drivers, semi-truck drivers, and others who operate commercial vehicles. Not only can drivers be charged with DUI for operating a commercial motor vehicle (CMV) with a BAC of .04 percent or more, these drivers can also lose their commercial driving licenses if they are charged with DUI while driving a regular vehicle. Commercial drivers may suffer the following after they fail a breath or blood test administered by an officer:

As any amount of alcohol consumption is illegal for drivers under the age of 21, minors can be charged with a DUI if they have a BAC of .02 percent or higher. These drivers may face penalties including:

Minors who have purchased, possessed, or consumed alcohol can pay fines up to $500 for a first offense and up to $1,000 for subsequent offenses.

Drivers under the age of 21 who are found with a fake ID may be fined up to $500, receive 12 points on their licenses (or have their driver’s licenses revoked), and spend up to two months in prison.

Any driver under 21 who violates the alcohol restriction law must automatically participate in the state Ignition Interlock Program or suffer suspension of his license.

Refusing a Breathalyzer Test in Maryland

Drivers can also face penalties if they refuse to submit to a blood, breath, or urine test to determine blood alcohol content (BAC). Refusal to be tested for drugs or alcohol can result in: